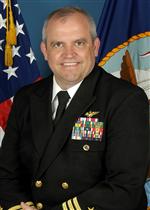 CDR Gregory J. Erickson was commissioned in 1992 aboard the USS CONSTITUTION through the Naval Reserve Officer Training Corps program. Raised in Livingston, Montana, CDR Erickson graduated from Boston University with a Bachelor of Science degree in Aerospace Engineering. Upon commissioning, CDR Erickson reported to flight school at Pensacola, Florida and earned the designation of Naval Aviator.

CDR Erickson’s initial sea tour was with Helicopter Anti-submarine Squadron Two (HS 2) flying SH-60F and HH-60H (Seahawk) helicopters. While with HS 2 he deployed to the Persian Gulf aboard the USS CONSTELLATION and qualified as a Helicopter Aircraft Commander (HAC) and Functional Check Flight (FCF) pilot.

In March 2003, CDR Erickson deployed with HCS 5 to Kuwait as part of Operation Iraqi Freedom. HCS 5 was assigned to the Joint Special Operations Air Detachment and flew missions in direct support of Navy Seals, Army Special Forces, Polish “Grom” and Iraqi Counter Terrorism Forces. Over the next 2 years, LCDR Erickson deployed 3 times to Iraq and flew over 70 combat missions.

In 2005, he attended the Naval War College in Newport, Rhode Island where he completed a Master of Arts degree in National Security and Strategic Studies.

He assumed command of Navy Operational Support Center, Amityville in February 2007. Under his leadership, the command received numerous commendations including the 2009 Golden Anchor Award for Retention. He then became an instructor at the Joint Forces Staff College in Norfolk, VA from 2010 to 2013.

Prior to becoming the Senior Naval Science Instructor at Cary High School, CDR Erickson was the SNSI at Western Alamance High School from 2013-2017. 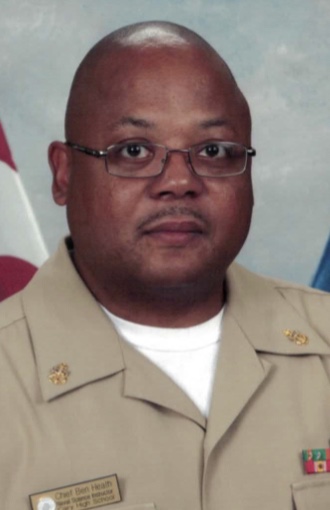 Benjamin was born and raised in Morristown, NJ.  He joined the United States Navy in 1996 as a Yeoman, which is an administrative position.  In 2000, he completed his dual bachelor’s degree in Business Administration and Computer Information Systems at High Point University. During this period, he converted to the position of Navy Counselor, guiding young Sailors throughout their careers.  In 2007, he completed his Masters’ Degree in Education Leadership at Trident Universisty.

After retirement he began working at Cary High School as the Instructor for the NJROTC Program in 2015.  He’s been married to his wife Sonya for 20 years and has 3 children, Benjamin, Morgan, and Megan.